As the Minister of Petroleum & Natural Gas of India, Shri Pradhan is attributed with several progressive reforms & initiatives implemented in the last five years including consumer initiatives like PAHAL which is the world’s largest Direct Benefit Transfer Scheme and the #GiveItUp campaign, that was liberally supported by the Prime Minister Shri Narendra Modi, aimed at encouraging affluent citizens to surrender their LPG subsidy for the needy receiving a successful response of 10 million consumers. In an attempt to empower rural India with the clean fuel of Liquefied Petroleum Gas (LPG), the Pradhan Mantri Ujjwala Yojana was launched by the Ministry of Petroleum & Natural Gas under which 7 million LPG connections have been provided to women from Below Poverty Line (BPL) families over the past 5 years.

Pradhan has led to some key decisions in the hydrocarbon sector, which indicates his commitment to the industry. Pradhan, supported by the Union Cabinet, has brought in a new Hydrocarbon Exploration & Licensing Policy, which through its uniform licensing for explorations and production of all forms of hydrocarbon, open acreage policy and marketing and pricing freedom will enhance domestic oil & gas production with substantial investment in the sector in India and generate sizable employment.

In his previous tenure as the Minister for Skill Development & Entrepreneurship (2017-19), Shri Pradhan also launched many key initiatives focussing on reskilling and upskilling the manpower of India and focusing on bridging the skill gap for the Indian youth.

A post - graduate from Utkal University in Bhubaneswar in Anthropology, he has been actively pursuing several issues concerning the youth, such as unemployment, the lack of skill-based education, rehabilitation and resettlement of farmers, and has played a major role in mobilising the youth in Odisha.

Pradhan started as an Akhil Bhartiya Vidyarthi Parishad (ABVP) activist in 1983, and has served in ABVP as Secretary. He has also worked as an election in - charge in Bihar and as an in- charge of party affairs in Karnataka, Uttarakhand, Jharkhand and Odisha.

Following his contribution to society and the party, Pradhan was awarded the ‘Best Legislator Award’, the Utkalmani Gopabandhu Pratibha Samman, 2002-03 and the Odisha Citizens’ Award in 2013.

He is married to Mridula Pradhan and has two children, Nishant & Namaisha.
Speaking At
Leadership Dialogue 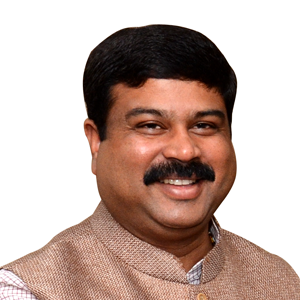